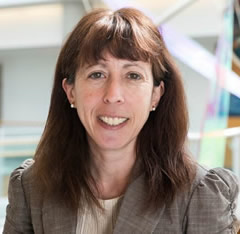 1) I am interested in studying the putative therapeutic effects of type I IFN on treating human endometrial cancers. Past studies have suggested that type I IFN, such as IFN-a and IFN-b, in combination with anti-estrogens might hold greater promise for treating estrogen-responsive tumors. The underlying mechanism might be that they up-regulate ER, and thereby, IFN make the tumors more sensitive to anti-estrogens, such as tamoxifen and raloxifene. My NIH funded study examines the effects that IFN-a and raloxifene have on various human endometrial cancer cells. As part of these studies, we will also examine the effects that type I IFN have on normal uterine ER expression. By using a microarray approach, we will further examine the effects of IFN on estrogen-responsive genes.

2) My second area of interest involves studying the effects that maternal diet has on offspring sex ratio. This research was initiated in order to determine how the sex of offspring can be influenced by the diet consumed by the mother. There is evidence to suggest that in several mammals, including humans, mothers on restricted calorie intake produce daughters more frequently than sons (see below). In contrast energy-rich diets may favor sons. Our hypothesis is that diet, either directly or indirectly (e.g. through hormonal changes in the mother), influences the nutrient conditions within the reproductive tract of an early pregnant female. These changes in turn could alter the relative abilities of either X- or Y-sperm to effect fertilization. Alternatively, an altered uterine environment might lead to preferential survival of embryos of one sex over the other. Such sex allocation might have adaptive significance, allowing a mother to produce offspring that provide her with the best opportunity of passing her genes on to future generations under a prevailing set of environmental conditions. We have established that in the mouse, a litter-bearing, polygonous species, mothers fed a diet high in lard produce significantly more sons than daughters, whereas mothers on a low fat, high carbohydrate, produce more daughters than sons. Experiments are underway to understand the mechanisms involved and whether a similar phenomenon occurs in sheep. An ability to manipulate sex of offspring through diet has potentially important application in the livestock industry.

Roberts RM, Ezashi T, Rosenfeld CS, Kubish HM. The interferon-t: evolution of the genes and their promoters, and maternal- trophoblast interactions in control of their expression. 2003; Reproduction 61:239-251.